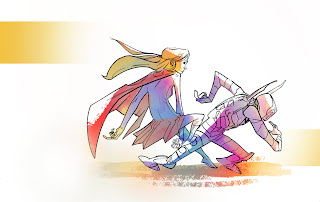 Color version of my sketch from earlier. I’m piecing together some newer coloring techniques with an older textural brush. I’m really happy with the result!
Posted by Evan at 3:48 PM 25 comments:

Sorry I've been away so long, I've tried various other outlets, but I just can't quit blogger! I have a Tumblr now as well, generally the same stuff I'll post here. artgantuan.tumblr.com
Other than that, still teaching, working on the odd-job here and there in comics. I just inked an issue of the Guild: Tink for Dark Horse with my friend Kristian Donaldson doing the great pencils!
But yeah, I should start posting here again, I think this is where I've been the most motivated. I'm not really sold on Tumblr's set-up, it's too insular and dependent on previously created content. Original content isn't really made for Tumblr as much. I'll still post there, but I'm more comfortable with this system.
Here's a step by step of how I generally work a sketch!
Posted by Evan at 1:00 PM 15 comments: 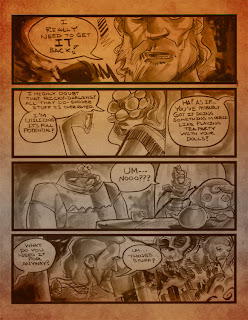 As my friend Ryan says, "Boom goes the dynamite!" Well, surprise! I didn't want to give any kind of warning. So out of the blue, I've brought back my webcomic Rick Dangerous! More craziness, but improved art...since it's been about 2 years since I last did a Rick Dangerous page!
Posted by Evan at 4:48 PM 4 comments: 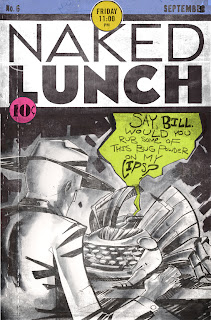 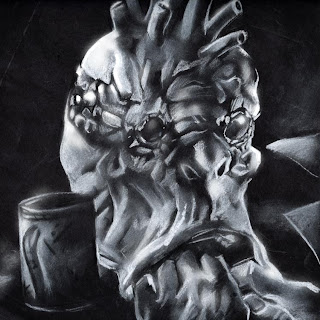 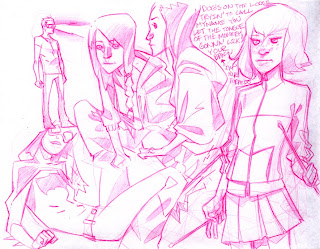 My friend Eric Skillman contacted a number of comic artists to do comic illustrations to be used as posters for the ATP film festival in New York. They were holding screenings of many Criterion movies.

I did the illustration, and I was lucky enough to have Eric wave his design expertise on the cover treatment!

It must always be said how much of a class act the man is to work for.
Posted by Evan at 3:50 AM 6 comments: 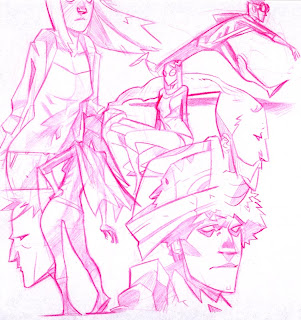 I really think I need to get back into daily sketching mode. Just got back from work a bit ago. We had meetings until late, but it's great working in a group of professionals whose personalities compliment my own. When you're all there for the student needs before your own, you know you've found a special group of educators.
Part of my inconsistency lately has been using the right paper, and unfortunately my standards just haven't been passing the test. But the copy paper at school is just what I've been needing oddly enough. It's got a great balance for pencil sketching, which I'm finding to be my strong suit. As much as I like inking, I've been feeling a bit inadequate, or at least unsure of myself. I think my best work comes from stream of consciousness drawing like this.
Posted by Evan at 8:50 PM 1 comment:

I am counting the hours as I am about to go back to work, but here is a fun little sketch I did this evening!
Posted by Evan at 12:02 AM 2 comments: 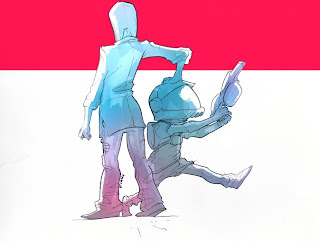 Here's something I did today while sitting at the car dealership. It's kind of a newer take on some older techniques. The image was just random, letting my hand just go. I think the problem is that I've been pressing down too hard with the pencil, this is what happens when I'm not using a piston grip, which feels a lot more fluid and comfortable. Sometimes it's the simple things that are easy to forget and cause artist's block, which I've been dealing with.
Posted by Evan at 6:13 PM 2 comments: 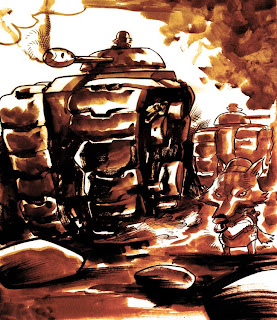 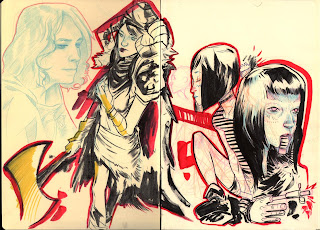 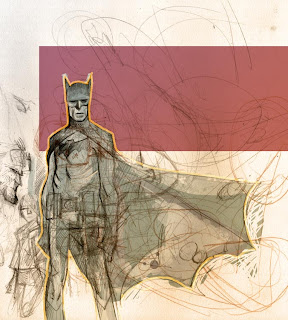 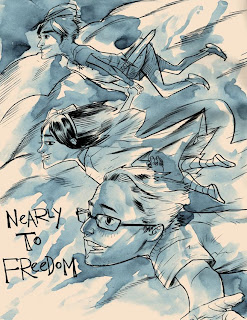 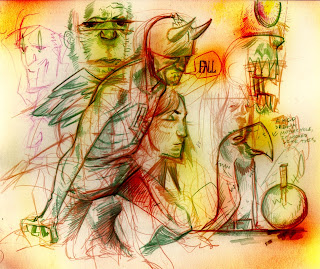 Here are some more pieces to catch you up to date!
Posted by Evan at 10:08 AM 5 comments:

Teh Links That Consume My Free Time

The home for buying original pages and getting commissions from moi (Evan Bryce).

Evan
Currently I am a Graphic Design/Illustration, and Animation teacher for high school students. It is a rewarding job every day, getting to work with some of the best and most talented students that will be our future workforce in the creative field! I have done comic work and illustration for Criterion, DC, Speakeasy, Markosia, Desperado Publishing, Image Comics, TOPPS, Verizon, AT&T, various online media sources, and a number of other companies. I love to teach, and I love art! Between those two things, it pretty much sums up my life so far. I tend to be a really positive person, but that's because I only work on projects I feel are fun! Here's an interview I did with Newsarama: http://www.newsarama.com/comics/050920-EvanBryce.html